Whew, I came back from Barcamp Houston. Exhausted.

(work in progress. I’ve going to add comments later when I have more time). The talk went pretty well, but I’ve noticed that I usually put too much stuff in presentations. It’s hard to have a sense how long a presentation actually will be until you’ve done it a few times. Teachers often have a chance to repeat a lecture and do it within a time limit.

There is a tendency for semi-geeks like myself to move the techie stuff to the end–which is unfortunate, because the information at the end of the talk tends to be more detailed and useful. I can’t tell you how often a talk has had general blather for 30 minutes, and then the meat of the talk comes in the last 3 minutes (and they were running short on time).

Ebooks is a narrow and specialized topic not likely to interest a large number of people (even in this geek crowd). On the other hand, the general questions raised about reading do have universal applicability, and I feel I raised some good points.

People who give technical talks basically have to choose between two things: do you wish your talk to be relevant (appealing to a general audience) or practical (appealing to a narrower audience)? More often that not, I end up going up the first path. For future talks, I want to try to give a talk of the second kind (practical). 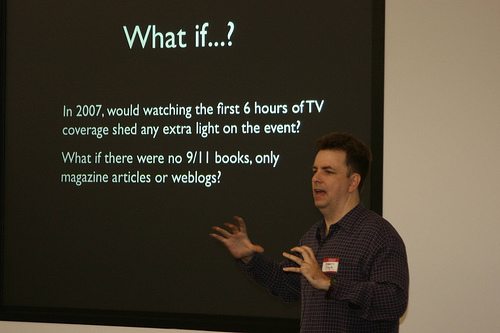 (I’m speaking about the nature of 9/11 coverage. Photo by Ed Schipul).

Other observations (I’ll add to the list as I think of it).