A lesson in humility

I write online fiction I’m very proud of. (It’s under a pseudonym; sorry).

Occasionally I will revisit old stories and reread them; sometimes to remember the beauty of a sentence or a sentiment – sometimes just to relive the story itself. A guilty pleasure, perhaps, but I confess that I enjoy being taken into a story again…

Yet, there is an ulterior motive. One reason I  reread old things is paranoia that  literary flaws previously invisible  will now be breathtakingly obvious.  Indeed, I ended up revising both stories.  For one I just did some minor word changes for rhythm, but the second story I found a paragraph which just did not work. It wasn’t merely boring; it was  wrong-headed (and the amazing thing is that I used to think it was profound).

I played around with it for a bit, gave up in frustration, took a nap and returned to it again. In an hour it was done, and the new version was uploaded. Thank god!  (To be fair, I could have played with it some more – and I surely will do so later), but the phrases just clicked with me.

(Oops; I just went over the paragraph again and made a minor adjustment of one or two words; but the paragraph is basically in tiptop shape).

I understand that revising is integral to writing; I even enjoy it. Sometimes I wonder if I tinker  too much.  Sometimes  I will make a change only to reverse it later. Yes, I obsess over words and phrases; that’s natural, but it can also be dangerous if it keeps you from progressing onto new things.

Frankly though, I was shocked to find the story’s  paragraph  so defective. How could I ever have convinced myself it was ok? I had considered the short story in finished form (checking the wayback machine, I see 5 different versions of the same story – and that probably is an undercount).  This is one of my shorter and easier stories; I just reread the two sentences I axed.  They sounded nice,  but today’s eyes  revealed how empty and hackneyed these sentences really were. The new sentences that replaced them aren’t totally original or breathtaking, but they did their job;  it was naming an idea with more subtlety and artistry. It was  a bit heavier than  the previous version of the sentence, but I weighed the two versions carefully; I am happy with the heavier version (because it’s doing so much more).  Anyway, it’s not that heavy.  38 words in sentence one; 26 words in sentence two. Really, they are compound sentences and not that hard; once in a while you are allowed to go on – as long as you don’t do too much of it.  In general I hate heavy sentences; they are such a pain for readers, and a minor stylistic imperfection can make it seem insufferable. But once in a while the situation calls for one, especially after I try my best to avoid it.  I’ll try a number of times and occasionally I will hit upon the magical combination—voila!  It’s generally a good thing to avoid overlong sentences; a writer friend of mine can do it with relative ease in his criticism, but in creative writing, heavy sentences just piss people off.  They piss me off too – especially when I can’t get it to work right. A good percentage of time I will give up in frustration and go back to turning the original thought into two sentences. But once in a while I succeed, and that feeling is glorious.

(Oops; rereading that paragraph in the story again, I notice that for the sake of parallel construction  I need to make something plural. A minor touch, but sounds better).

I’m a better than average writer for  first drafts (btw, this  whole blog is a kind of first draft – watch out!)  Even when I revise, I don’t feel as though my editing skills are top-of-the-class. I sometimes get sloppy.   I certainly don’t have the benefit of an outside editor or a friend who can correct things over my shoulder. But I manage ok.

I think about Chekhov. An insanely good writer, but he never had the benefit of being able to revise old stories via ftp or wordpress.  He just wrote, had his editor make a few changes, published it and  forgot about the story forever. Of course, he was making a bit of money at the time (those were the days where a few lucky  short story writers could actually make a living). 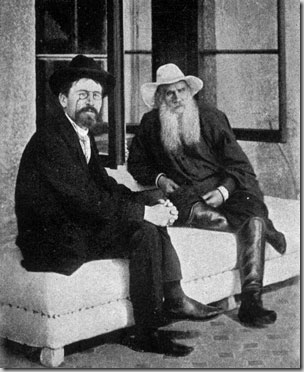 Though I hesitate to compare my writing to Chehkov’s  (certainly he had  a richer life),  my writing process is far superior to his. Partly it’s a result of modern technology, partly it’s a result of my having substantially fewer eggs in my basket  to deal with than Chekhov did (I take unusually good care of my eggs). It’s a myth to think that enough  time/effort/suffering equals a literary or artistic masterpiece. Sorry, it doesn’t work that way. Artistic success depends on a combination of factors – the ability to stay engaged in life and mentally healthy,  the ability to ignite enthusiasm in others, the ability to uncover new kinds of experiences and ideas, the accidents of biography and genetics (not to mention family and friends).  Chekhov stayed closely in touch with the common man, and that helped him a lot.  My life is not particularly exciting (it can even be dreary), but at least there are no famines or nuclear wars or schizophrenia to suck the wind out of me.   If I stayed in a room all of my life writing and perfecting my craft, I could develop  a flawless style and have nothing interesting to say.  (Wouldn’t it have been better to be a journalist who covered the local crime beat – and to hell with literary devices?)

Chekov died at the age of 44 and 6 months. Kafka died at the age of 40 and 10 months. Camus died at 46 1/2. F. Scott Fitzgerald died at 44 and 6 months. I am 44 years and 2 months.  There is no reason to believe I won’t last another 40 years (although who knows – I could slip in the shower and break my head open and die the next morning; hey, if that happens, It’s been good knowing ya!)  I have a good friend my age who struggles with cancer; she faces questions of mortality  every single day.  It’s extremely sad, and my heart goes out to her. For me, death is still a kind of abstraction or maybe  a cool special effect in a monster  movie.  Let me revel in my sense of immortality for as long as I can.

Update: Rereading the original version of the paragraph from the story, I am struck by how much nicer the original version  reads – despite adding no new insight.  The new version is much  wordier. Ok, I just spent 20 more minutes playing with alternatives. I threw out both versions, tossed out words, and experienced frustration again.  I re-added words, chopped things up and tried again from scratch. The result is much more satisfying! (5 minutes later: Oh, no, I changed something again; I have gone from using 1 adjective to 2 and to 1 again. One thing you notice in careful writing is how one phrase  will cancel out  the need to use the other word; (I can disclose that: I went from writing “provocative” to “provocative and edifying” back to “provocative” again).

Update 2 . Try as I might, I have no idea what story I am referring to!
Update 3 Oh, no I remember what it was. It is my I.L story . I read the paragraph again. I am happy to report that it doesn’t induce vomiting.

Next post: Denialism: A disease which can affect generally smart people

Previous post: No time to blog, but time enough for outrage