Republicans vs. Democrats on the economy

I’ve been busy working on a series about creative commons musicians; expect this blog to explode very soon. Here are some incidental things caught along the way.

Here’s a graph made by political scientist Larry Bartels: 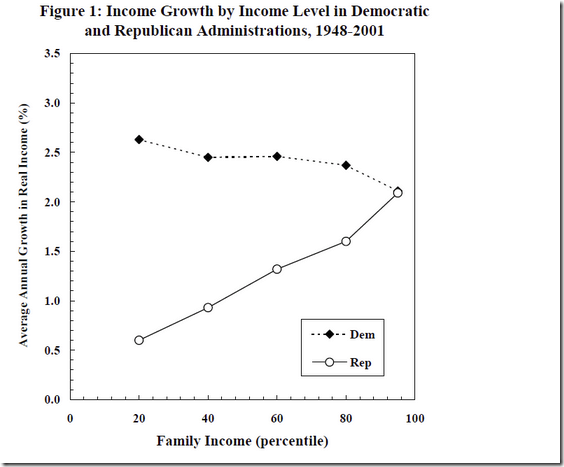 The average pattern is, for Democrats: strong economy in years 2-3, weak in year 4; whereas with Republicans, it’s weak in years 2-3, strong in year 4. (Larry didn’t include year 1 in his analysis since you’d attribute performance there to the previous president.) Why this would be isn’t completely clear, but Lucy Goodhart suggested it could be a natural consequence of the different goals of the two parties, and the general belief that a president has the most ability to do what he wants during the first two years after his election. The Democrats have unemployment-reduction and economic-expansion goals, which expand the economy in the first two years, but then some combination of budgetary constraints and a desire to move toward the political center lead to contraction in the second part of the term. Conversely, Republicans are more likely to pursue deflationary policies when they can (at the beginning of the four-year term), and then their move to the center later on has the electoral benefit of expanding the economy. And lots of evidence shows voters to be responsive to economic performance in year 4, not to the four-year total.

This paper was referred to in a blog discussion about a great economic analysis by Neil Irwin :

There has been zero net job creation since December 1999. No previous decade going back to the 1940s had job growth of less than 20 percent. Economic output rose at its slowest rate of any decade since the 1930s as well.

Middle-income households made less in 2008, when adjusted for inflation, than they did in 1999 — and the number is sure to have declined further during a difficult 2009. The Aughts were the first decade of falling median incomes since figures were first compiled in the 1960s.

Tyler Cowen suggests that this pessimism is not shared by the rest of the world:

The raging economic growth rates of China and India are well known, though their rise is part of a broader trend in the economic development of poorer countries. Ideals of prosperity, freedom and the rule of law have probably never been more resonant globally than they’ve been over the last 10 years, even if practice often falls short. And for all of the anticapitalistic rhetoric that has emerged from the financial crisis, national leaders around the world are embracing the commercialization of their economies.

Putting aside the United States, which ranks third, the four most populous countries are China, India, Indonesia and Brazil, accounting for more than 40 percent of the world’s people. And all four have made great strides. Indonesia had solid economic growth during the entire decade, mostly in the 5 to 6 percent annual range. That came after its very turbulent 1990s, marked by a disastrous financial crisis and plummeting standards of living.

Brazil also had a consistently good decade, with growth at times exceeding 5 percent a year. There is lots of talk that the country has finally turned the corner, and, within its borders, there is major worry that its currency is too strong — a problem that many other countries would envy.

(Here’s a longer discussion of his article on his blog).

Previous post: To the person who is not reading this