I really hate to blog about topical events, but this one irks me in particular.   I have been totally overlooking  the festering wound in Gaza.

If you are looking for reliable sources on the Palestinian side, try Juan Cole’s Informed Consent blog  and the blog of Ali Abunimah of the always great Electronic Intifada). What follows is just a hodgepodge of things to strike me.

Forget for a moment that Israel is stealing European passports to assassinate people or that it ignores the Goldstone  Report which found them responsible for the overwhelming majority of civilian casualties in Gaza.  Forget for the moment that (according to Juan Cole) conditions in Gaza as a result of the Israeli blockade are deplorable:

Forget for a moment that the aid ship contained not Hamas terrorists but a Nobel Peace Prize winner, a former UN official, several writers, filmmakers and liberal peace activists from around the world. Forget for a moment that US is supplying billions of dollars every year to the Israeli military, turning a blind eye toward Israel’s nuclear ambitions and humoring Israel’s dreams of destroying Iran.

The whole point of the “Gaza flotilla” was to get a reaction out of Israel and call international attention to the problem of the blockade of Gaza. Israeli officials described it as “a provocation” and I’m not sure that was entirely incorrect: like all other acts of civil disobedience it was designed to provoke a response. I’m shocked but not surprised that the Israeli military, which was determined to prevent those ships from reaching the Gaza port, managed to mishandle the situation so badly that, as present report stand, at least 10 flotilla participants were killed and 60 injured. The Israelis claim that the ships had weapons on board and that their commandos were attacked with sticks and knives and had to defend themselves. I don’t think anyone in the world with the least degree of critical rationality is going to take this explanation at face value. It’s been rendered even more fatuous by the extraordinary hyperbole coming out of Deputy Foreign Minister Danny Ayalon, who claimed that flotilla members were connected not only to Hamas, but to Al Qaeda! Next they will be telling us these were members of the Nazi party. It won’t wash.

Adam Shapiro comments about the provocative nature of the expedition:

We need to look at one case: that of  Emily Henochowicz, a 21 year old Jewish-American  artist who was injured by Israeli soldiers for protesting Israel’s assault on the aid shipment. (More).  This woman’s crime is  of posing a  threat to  the moral legitimacy of the Israeli regime.  (By the way, all the images for this post are from her sketchbook. I think Emily’s drawings certainly have  political aspects to them, but it would be naive to say they are only political works of art (not that there’s anything wrong with that).  I would describe them as more free-spirited and upbeat than anything else.

We also need to look towards the admittedly humorous case of Noam Chomsky being denied entry into the West Bank to give a lecture . Chomsky poses a threat to nobody except to the overall moral legitimacy of the Israeli government.

This is a government that discriminates against Arabs and allows itself to retaliate against attacks by killing 8 to 10 times the original number.

I have friends who are Israeli or Israeli supporters. As contemptuous as I have been about the policies of the Israel government, I have never questioned Israel’s right to exist as a legitimate government.  But:

Jonathan Schwartz notes that the US is committed to making sure Israel stop its provocative behavior, halt its policy of threats and belligerence toward its neighbors, and take irreversible steps to fulfill its denuclearization commitments, and comply with international law  and the US is also committed to holding  perpetrators of acts of piracy  accountable for their crimes. (ha, ha!). Andrew Sullivan notes that because the aid ship was flying a Turkish flag, it has the right to request NATO help against its aggressors (now, that would be fun!). 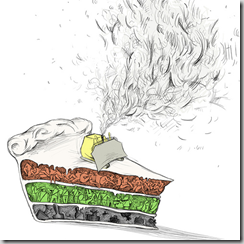 for this sketch, Emily Henochowicz writes “Ingredients; One layer of determined activist over a layer of obediently angry army men, and a layer of camera people (to give it that worldly flavor) with a bulldozer on-top!”

In the sketch below, we see a wild flurry of shapes and movement.

Update: Glen Greenwald has been following the legal issues closely.  I wouldn’t go so far to say that NYT coverage is “biased,” only that it is very tardy covering some aspects of the developing story (and that shapes people’s perceptions of the story). Why hasn’t NYT provided an ongoing list of the detained people? Why hasn’t NYT covered the international outrage at the Gaza blockade? Finally, why hasn’t the NYT covered just how much military assistance Israel receives from the US? I’m at the point of trusting CNN a lot more on this particular story. But it calls attention to the need to have alternatives to the NYT for coverage.

Update 2: 2 videos by a US born human rights lawyer: her eyewitness account of the incident and her video made a week ago about the aims of the freedom flotilla. She is certainly not “neutral”  about the matter and  every freedom flotilla passenger knew full well about the dangers   and the certainty of confrontation.  Isn’t it sad that the only people with the influence to change political opinions are Europeans and Americans (but not Palestinians or Israelis)?