Why CNN doesn’t do global warming

Ross Gelbspan about why CNN doesn’t do good coverage of climate change:

One of the first impacts of climatic instability is an increase in weather extremes – longer droughts, more heat waves, more severe storms and the fact that we get much more of our rain and snow in intense, severe downpours.

That is reflected in the fact that extreme weather events constitute a much larger portion of news budgets than they did 20 years ago. Given the dramatic increase of extreme weather events – you would think that journalists, in covering these stories, would include the line: "Scientists associate this pattern of violent weather with global warming." They don’t.

A few years ago I asked a top editor at CNN why, given the increasing proportion of news budgets dedicated to extreme weather, they did not make this connection. He told me, "We did. Once."   But it triggered a barrage of complaints from oil companies and automakers who threatened to withdraw all their ads from CNN if the network continued to connect weather extremes to global warming. Basically the industry intimidated CNN into dropping the one connection to which the average viewer could most easily relate.

There is one more phenomenon that has severely undermined press coverage of the climate crisis – and that’s the conglomeratization of the news media. Until about 15 years ago, most newspapers were owned by companies that were truly committed to the mission of providing news – and were content to reap a seven or eight percent profit margin. But as huge media corporations began gobbling up many of the country’s newspapers, investors became major drivers of press policy.  In short, Wall Street became the tail that wagged the dog. To increase circulation, many papers have substituted more celebrity coverage, more self-help articles and more trivial medical news for investigative reporting of complex topics.

Dr. Trenberth on how climate change influences the severity of floods:

For every one degree Fahrenheit increase in sea temperature, the water holding capacity for the atmosphere goes up by 4%. And since the 1970’s on average there’s about a 4% increase in water vapor over the Atlantic Ocean and when that gets caught into a storm, it invigorates the storm so the storm itself changes, and that can easily double the influence of that water vapor and so you can get up to an 8% increase, straight from the amount of water vapor that’s sort of hanging around in the atmosphere. This is reasonably well established.

And so then, when you have the right conditions, and in the spring time, these conditions tend to occur, and the storm stalls a little bit (it ran up against a roadblock for a while), then this is one of the consequences.

So although a lot of aspects of this is the sort of thing that happens is weather and natural variability, one could easily argue that up to about a 10% enhancement of this is associated with global warming. And possibly even more in terms of some of the other things that are going on but which are much harder to pin down. 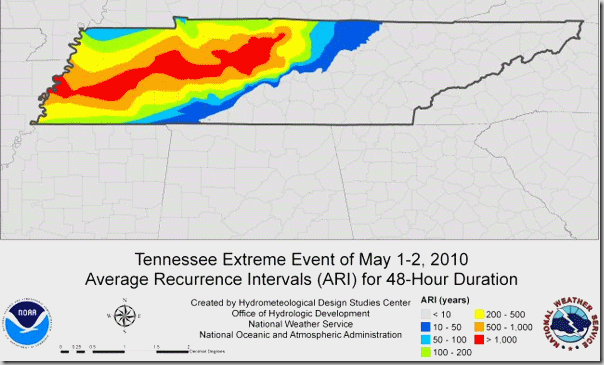 Joe Romm explains this graph, talking about how the Tennessee floods had large areas had extreme temperature events which happened once every 1000 years.

Eric Alterman analyzes how the BP oil spill was a disaster long in the making. Amazing analysis, with lots of important links.

The MMS collected only 16 fines out of the 400 investigations it conducted into Gulf of Mexico drilling incidents over the past five years. MMS found about 200 violations of safety and environmental regulations, but “many proposed violations get reduced or dropped during behind-the-scenes reviews,” according to a Houston Chronicle investigation.

Steven Thomas notes the problems in how Obama Administration decided on the  offshore drilling issue:

Despite heroic efforts involving more than 11,000 people, 2 billion dollars, and aggressive application of the most advanced technology available, only about 8 percent of  oil was ever recovered. This recovery rate is fairly typical rate for a large oil spill. About 20 percent evaporated, 50 percent contaminated … beaches, and the rest floated out to the North Pacific Ocean, where it formed tar balls that eventually stranded elsewhere or sank to the seafloor.