I sometimes say that the situation we are in is like driving a car with bad brakes toward a cliff in the fog. The fog represents the uncertainties that still surround many important aspects of the science and make it impossible to say exactly how far away the cliff is. But the prudent strategy is to start putting on the brakes in that car. The fog is not a consolation if you’re driving a car with bad brakes toward a cliff. Some of the skeptics say this, that, or the other thing is uncertain, so we shouldn’t do anything. No, we should put on the brakes. I believe that if we start putting on the brakes now, if we take the measures that are available to us to reduce the human emissions of greenhouse gases into the atmosphere, the emissions both from fossil fuel burning and from tropical deforestation, we have a good chance of not driving the car over the cliff. We can’t be absolutely sure, because we don’t know where the cliff is. But prudence requires that we take the possibility of not driving over the cliff by starting to put on those brakes. The interesting thing is that it’s not that expensive. It’s not that difficult to put on the brakes.

Fascinating article by Peter Gleich about the logical inconsistencies of climate change denialists. Here’s my fave:

In addition, none of the economic models that look at the costs of reducing greenhouse gas emissions addresses the other, critical side of the economic argument — the vast and exponentially increasing costs to society of doing nothing. What’s the economic cost, for example, of losing California’s snowpack or a species of plant or animal? What’s the economic cost of a one-month acceleration in the timing of runoff in major rivers in the western U.S.? What’s the economic cost of rising sea level or growing heat stress or more intense storms or changing distributions of plants and animals — all impacts that are certainly going to occur? Perhaps we can compute some dollar values for some of these things, but we haven’t yet, and so no complete estimates are included in cost comparisons. In other words, climate deniers and those who argue against action say that the cure (reducing emissions) is worse that the disease (the impacts of climate change), when we have contradictory estimates of the costs of the cure and no comprehensive estimate of the costs of the disease.

I made a comment (which probably be approved from the moderation queue):

Why do denialists accuse academics or government scientists of having an agenda (just wanting to get research funding) without acknowledging that people funded entirely by industry are even less likely to provide an objective point of view?

Why do denialists accuse renewable energy companies of just seeking a government handout when fossil fuel industries receive even more through tax breaks?

Why do denialists focus on isolated instances of conspicuous consumption by Al Gore (and others) while oblivious to the consumption habits of fossil fuel execs? For example, whose home energy bill is likely to be higher: Al Gore or Exxon’s CEO? Why then is Al Gore’s electric bill in the news, but the CEO’s electric bill is not?

What do denialists focus on the carbon footprint of China when per capita footprints of Americans is up to 10x higher? When one of my denialist friends mentions, "Oh, our carbon usage is nothing compared to China’s; that’s where the real problem is." My reply is usually, "The easiest and most effective war to reduce the world’s carbon footprint is to change the behavior of individual Texans — not Chinese citizens.”

Related: George Monbiot warns about how astroturfing pollutes the online debate. There really is no way to know how widespread this practice is being done.

Potholer’s First Law: Myths are created much faster than they can be debunked.  (Watch video explanation).  In this video, the creator debunks a scientific myth. However, more fascinating than the video is why the research was misrepresented and how the myth was spread online.

Here’s a fascinating graph about which coal plants need to be retired (according to climate change analyst David Roberts. ) TRE includes ERCOT by the way.  He was reporting on a study which predicted how the new regulations will cause ancient coal plants to be closed. Clearly some regions depend more heavily on older and more polluting coal plants than others. By the way, I can’t find the article, but relatively speaking the state of Texas coal companies isn’t that bad; we have a lot of the newer coal plants which probably are cleaner and more efficient than the ones in Ohio and West Virginia.

(Just to be clear: I believe that the optimal level for CO2 in the atmosphere should the same level of how many grandmothers should be mugged. Mugging 2 grandmothers is certainly better than mugging 10, but the optimal number of grandmothers who are mugged should always remain zero). 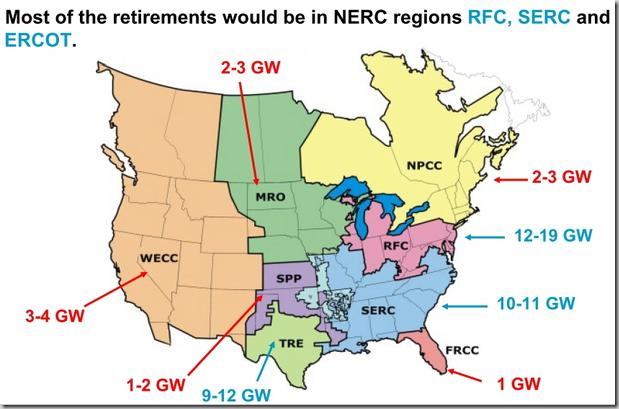 Finally, I’ll be attending a Sierra Club outing tomorrow about the Tar Sands pipeline which will be flowing through Houston and refined here. The Sierra Club site writes:

A study done by the University of Texas and the city of Houston in cooperation with the EPA targeted twelve hazardous air pollutants generated by petrochemical refining; all twelve chemicals registered present in Parras’s community. Eight are known carcinogens, and registered at elevated levels. Parras sees the tragic manifestations of these chemicals in the children of his community.

"A lot of kids are getting leukemia. You have a 56 percent greater chance within a two mile radius of the Houston Ship Channel of contracting leukemia" says Parras, referring to the EPA study. With Houston refineries planning to process an additional 900,000 barrels of the world’s dirtiest oil every day from the Keystone XL pipeline, rates of pollution and disease in the area can only be expected to increase. 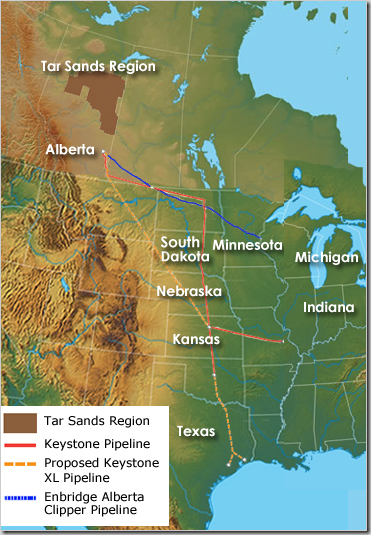 Here’s a 4 minute video by Sierra Club which summarizes the case against the tar sands pipeline.

Next post: Titanic as a metaphor for Climate Change

Previous post: The Keys to the City are Yours